A COMPANY widely recognised as the world’s finest brush manufacturer produces its handles on a custom-built CNC machine tool, which is one of only two in the world and it is programmed by Alphacan software.
The CMS Triposto router has three beds on each of two tables, with eight tool holders on each head.
It enables GB Kent and Sons to manufacture six wooden handles of any shape in one quick cycle and one operation, as well as providing the absolute micron accuracy required in the wooden handles to ensures that the bristles fit perfectly.
GB Kent’s chief engineer, Darren Neep explains that the cycle time for simple shapes can be as short as one minute, whilst an average complex shape with considerable five-axis work can take up to 15 minutes.
‘However, as the router cuts six brushes at a time – three on each of the two tables – we can produce six simple brushes every three minutes,’ explains Darren Neep.
He says that Alphacam is vital to the company’s complete CAD and CAM operations, as they have more than 60 different products, including hair brushes, bath brushes, clothes brushes and shoe brushes, each requiring individual programs.
The brushes, made from several woods, including beech, cherry, satinwood, ebony and sapele, vary from around 100mm in length to 400mm and need between two to 20 cuts.
‘Even machining six of our larger and most complex bath brushes, which is full of curves, angles and different radiuses only takes around 25 minutes,’ says Darren.
He says that if the work were to be carrried out on traditional CNC machines, it would require several set-ups for individual operations, but with Alphacam powering the Triposto, it generally produces finished brushes with all required radiuses, holes, countersinking and profiles, by machining half the brush on one bed, then transferring it to the second station for the remaining work, leaving no secondary machining other than finishing.
As well as optimising productivity, the machine also provides the tight tolerances their CNC filling machine needs to insert the bristles.
‘Most brush manufacturers use what’s known as a bar anchor to fix their bristles, but because we’re more quality focused, our bristles are fixed with a 9mm staple, which requires that the thickness and profiles are accurate to within 0.5mm. This has to be absolutely right, otherwise the bristles won’t stay in the board,’ says Darren.
Quality and speed of production were the driving force behind GB Kent investing in the Triposto purpose-built machine and Alphacam.
Technical manager, Steve Davis, who manages IT and production, says that previously some of the handles were manufactured in-house with ageing equipment and some were produced in China, but both were causing quality issues.
He says that an ageing workforce meant that they were starting to lose the skills required to run the old machinery…and they also wanted to bring all production in-house, so that they could put “Made in England” on their brushes. Another factor was the need for shorter lead times, so that they can react to customers’ demands much faster.
‘Our craftsmanship and unprecedented quality has held our reputation for almost 250 years. Combining this latest hi-tech manufacturing process with our traditional methods, means that every brush leaving our factory is still the world’s finest,’ says Mr Davis.
Alphacam manages all aspects of production, from CAD, through CAM, to the post processing.
Darren Neep creates 3D models of each brush in Alphacam Designer, then imports them into the CAM function to create the tool-paths and post process them to the Triposto.
‘I can generally complete a program within two hours and then there’s another hour on the machine to prove it out and make any tweaks… and then we’re ready to start cutting,’ says Darren.
Jigs and fittings are also created in Alphacam Designer and once they’ve been transferred to the CAM functionality, he runs a simulation to ensure that there is no conflict with tool-paths, that may cause collisions.
‘We initially opted for Alphacam’s 3+2-axis package, but subsequently upgraded to the full Advanced five-axis module. This has been vital in helping us go from a company with no CNC experience less than two years ago, to now producing around 800 high quality brushes a day,’ concludes Steve Davis. 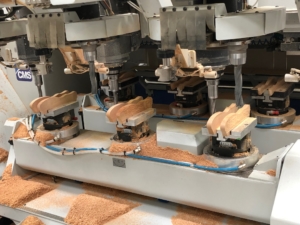 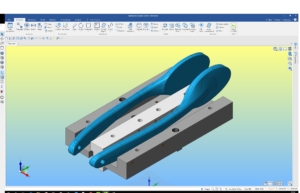 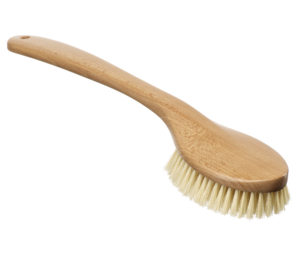